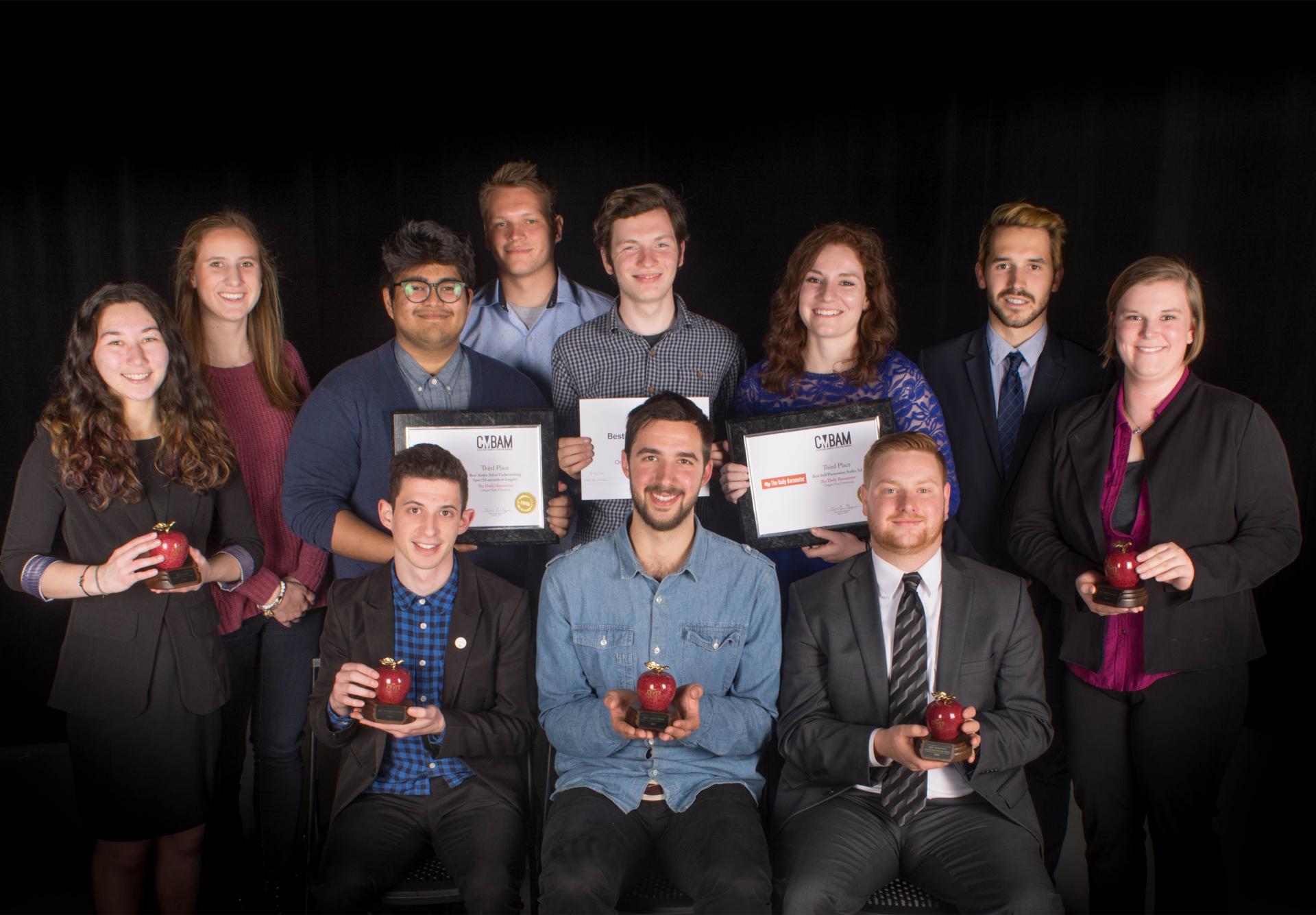 Spring 2017 —  — An automation system runs in the background of Orange Media Network’s radio station KBVR 88.7FM, playing music between shows so that every hour on air is filled. Making sure that system runs smoothly is one of Anthony Heatherly’s duties as KBVR station manager, but he has his sights set on higher goals. “By the end of the school year, we will have trained 100 students to be DJs,” he says. “We want to get every hour programmed with student content.”

Training DJs is not all he’s doing. Heatherly, an environmental science major with an option in education and water resources, puts his unique skill set to work at Orange Media Network (OMN) every day, acting as liaison between the station and other campus resources, helping departments create podcasts and other news items and, yes, making sure the automation system never stops running.

“To sum up my day,” he comments with a smile, “it would be so hard to describe it.”

That phrase could just as well sum up OMN’s effect on the Oregon State community and beyond. The student-run network consisting of six student media — four print publications, a radio station and TV channel — has garnered national acclaim. OMN won six awards at the College Media Association 2017 Apple Awards, five of which were first place recognitions in categories such as best news delivery, best newspaper (of four-year universities with a circulation of more than 10,000) and best radio promo. On top of the CMA awards, two of OMN's video students, Lucas Paris and EJ Albaugh, were also recently nominated together for a Northwest Emmy for Best Videographer/Editor.

But there’s more to OMN than winning national awards; it also provides students with valuable work experience in a versatile media realm.

“The awards are certainly nice, but they’re not the goal,” says Candace Baltz, director of Orange Media Network. She oversees the whole OMN operation, which includes 450 volunteer and paid student staff. “The goal is for our students to go on to be engaged, deadline-meeting, critical-thinking, high-level-seeing members of society, whether that’s in medicine, politics, law, education or media.”

This goal is important when you consider the wide net OMN has over the Oregon State University campus and Corvallis community. This year, The Daily Barometer — student newspaper since 1896 — changed from a daily print newspaper to daily online newscasts. These segments, called News Blasts, are two and a half minutes and posted every morning. In addition to these daily News Blasts, print publications of The Daily Barometer still come out every Monday on campus and every Tuesday as an insert in The Corvallis Gazette-Times — a total distribution of 12,000 copies each week.

The transition to online mini newscasts mirrors major professional publications like The New York Times and NPR. And OMN is taking it a step further, Baltz says. They’ve created a web and mobile department overseen by a student leader of equal status to the editor-in-chief of print publications and the television and FM station managers. This student leader oversees all of the digital strategy for OMN and a staff that works with social media components in creating unique online content. According to Baltz, this position is still in its infancy. “But it’s been really exciting to see it grow. We have three candidates applying for the position this year — three students who see themselves as wanting to move it forward, make it better,” she said.

In total, OMN has 15 student leadership candidates ready to take over positions for the next academic school year — an amazing turnout of students excited and willing to move the network forward. In fact, OMN is bristling with just such dedicated student leadership. Claire Wilding, another student worker at OMN, hopes to start a career in the business world one day. Right now, she’s a senior at Oregon State pursuing a Bachelor of Science in Business Management. At OMN, she works as an advertising executive, establishing relationships with different campus departments and organizations to help them advertise events and other promotions through various OMN-operated media platforms.

“I’ve had some of the best professional experiences at this job,” she reflects. “I believe (they’ve) prepared me for my future career. Meeting new people can be a challenge, but the feeling after I get to know clients and help them find ways to advertise to students is the best feeling ever.”

After reflecting for a moment, FM station manager Anthony Heatherly echoes Wilding’s sense of professional growth, and tries to describe the indescribable. “There’s not a job I think I could have had that could have prepared me (so well) to be a manager,” he says about his experience facilitating the behind-the-scenes of KBVR 88.7FM. “Someone calls you and says they’re not coming in, or all of a sudden a meeting gets canceled and you have to reschedule, or you’re waiting on some important information from your advisor but they’re out for the day and you can’t talk to them.

"I’m glad I got this opportunity because now I feel like I could go out into any other sort of managerial position and I could handle the day-to-day chaos that comes up.”

For Baltz, these moments of student confidence are what OMN is all about — when students face a problem, often for the first time, and find they have the tenacity to surmount it. “Every time they make that leap — and it’s a leap of faith, that it’s going to be okay, that they’re still smart and awesome even if something doesn’t go perfectly right — that is the moment, more than the awards, more than the scholarships or job offers, that informs their own personal philosophies for how they work and engage in the world. It’s the moment that gives them courage,” she says. “That, for me, is the best.”

It seems like the world, not just Oregon State, is lucky to have these students tasked with delivering its news. They won't, as Heatherly might say, let the tape stop running.